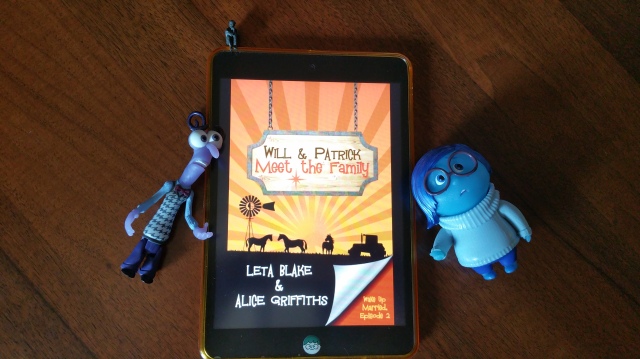 Title: Will & Patrick Meet the Family
Author: Leta Blake, Alice Griffiths
Why you should read this book: Second book of this serial and things are getting really interesting!

Meeting the family is challenging for every new couple. But for Will and Patrick, the awkward family moments only grow more hilarious—and painful—when they must hide the truth of their predicament from the people they care about most.

Throw in the sexual tension flaring between them, uncomfortable run ins with Will’s all-too-recent ex-boyfriend, an overprotective mobster father, and a mafia spy tailing them around Healing, South Dakota, and you’ve got a recipe for madcap laughs and surprisingly heartwarming feels.

We left Will answering a call from him mom letting him know that RYAN (I can’t begin to express my hate for that guy) told her he got married in Vegas. Why does he think any of this is his business after treating Will like trash?? And of course Will still loves him, and of course he feels Ryan is right about everything he says about him. I can’t stand how Ryan messes with Will’s head; he deserves a hard punishment, some kind of bad juju for all he’s done.

Patrick is still the best character. A hard cocoon with a frail heart. He still doesn’t love Will that way (but it’ll happen, they won’t be able to stop it from happening) but he is starting to care more about him. He is starting to hate the way Ryan makes Will feel and the way his family doesn’t trust him with his choices.

“Now build a bridge and get over yourself. You know what you should do.”

His family seems to believe Will is incapable of dealing with his life without the loving care of Ryan. They don’t know a thing, they think Ryan is a Saint and without him Will is a living mess. They don’t know how bad he makes Will feel with his comments and new boyfriend. I hate Ryan, he is seriously the worst!

It’s always the shiny ones that bring a man down in the end.

New characters get to know Patrick and hate him at first sight without actually getting to know him better. Some characters do love Patrick like Jenny and his baby Dylan; they are becoming Patrick’s best friends! Patrick is incredible and I know it takes some time but in the end you can’t do anything but love him with all his flaws. Will knows it but now he needs to remove Ryan from the equation and focus only on Patrick and on the tension building up between the two of them.

Do I recommend it? Yes, there is tension and it is beautiful.
Rate: 4/5