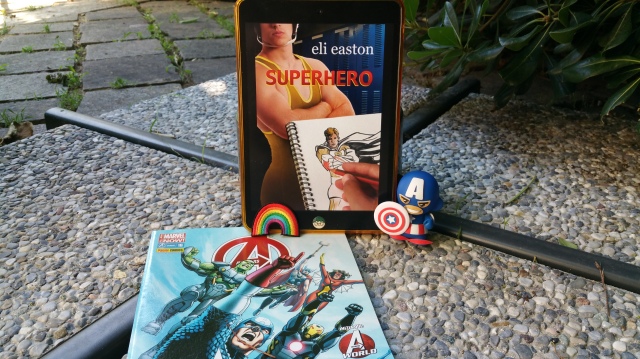 From that day on, Owen was my best friend—jelly to my peanut butter, fellow pea in my pod, Sam to my Frodo. And I was his.

Title: Superhero
Author: Eli Easton
Why you should read this book: Because it is short but it’s sweet. It’s worth the few hours it will take away from you.

It’s not easy for a young gay artist like Jordan Carson to grow up in Jefferson, Wisconsin, where all anyone seems to care about in middle school and high school are the sports teams. But Jordan was lucky. He met Owen Nelson in the second grade, and they’ve been BFFs ever since. Owen is a big, beautiful blond and their school’s champion wrestler. No one messes with Owen, or with anyone close to him, and he bucks popular opinion by keeping Jordan as his wingman even after Jordan comes out at school.

Their friendship survives, but Jordan’s worst enemy may be himself: he can’t seem to help the fact that he is head-over-heels in love with a hopeless case—his straight friend, Owen. Owen won’t let anything take Jordan’s friendship away, but he never counted on Jordan running off to find a life of his own. Owen will have to face the nature of their relationship if he’s to win Jordan back.

I thought about how he’d given up being perfect for being real. For us. For me.
And I realized that Owen Nelson was the greatest superhero ever.

This was a really cute short book about friendship, love, acceptance and geek stuff. I loved their conversation about Sandman and Superman. I totally think Sandman would win over the man of steel, that’s a given. We’re talking about the Sandman! Come on!

Jordan and Owen, best friends since they were little. Jordan found out he was definitely gay after the “pool incident” and has been in love with his straight best friend, Owen, ever since. Maybe also from the first time he set his eyes on him.

I’d spun that one kiss in the pool into so many variations I could probably claim a Guinness World Record for Most Exhausted Fantasy.

The gay for you stories aren’t always my favorite, they usually lack something, I don’t know exactly what, but they lack something important for me to enjoy the story fully. This story is not like that. It is rushed, years and months pass in the blink of an eye but I can’t complain. It delivers what I wanted or needed it to deliver to me, even with a couple of superfluous subplots.

My point is, no one’s going to come shopping if the ‘for sale’ sign isn’t on the door.

I liked them both a lot; they are nice characters with their personalities and passions: Jordan is an artist and Owen a wrestler. They are best friends and you can see it in the way they are always together, they share everything and they are always looking after each other in any kind of situation.

It was a very sweet love story and it made me smile. Jordan has always being in love with Owen but what about Owen, the god of wrestling? Owen has a girlfriend but he is confused by a couple of not-really-accidental episodes. He knows he has to talk with his inner self and asks some very important questions or else he will do what others want him to do and not what he wants to do. But will he realize that what, or better, whom he wants was Jordan all along? That Jordan is the key of his happiness and without him nothing makes sense, not even being the wrestling champion of the universe?

Besides, if there was a secret way to my heart, it was Jordy.

Of course he will realize it, this is a short book and it has a happy ending! I started it knowing it had it or else I wouldn’t have started it, I’m not a masochist (not always). I needed happiness! I’m still smiling, this book made me happy!

Do I recommend it? Yes, it is adorable and, yes, it has steamy parts which is always good.
Rate: 5/5