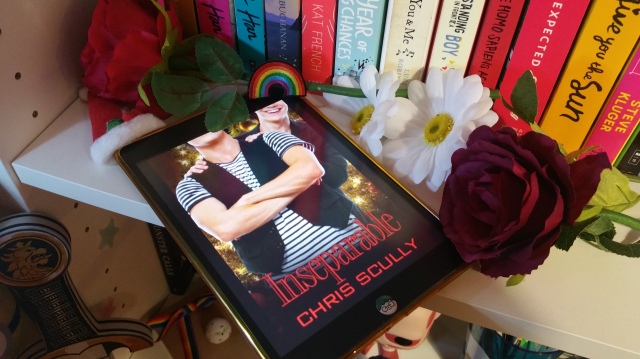 I’d rather be miserable with you than not be with you at all.

Title: Inseparable
Author: Chris Scully
Why you should read this book: Because it is short and it’s cute and I don’t think there’s more to say to convince anyone to read it.

After a car accident, Adam wakes up in a hospital room with no memory and a man named Joe, who acts like his boyfriend. So when Joe says Adam is straight—and Joe’s not—and they’re just best friends and roommates, Adam is more than a little confused. But as Adam starts to fill in the gaps, the one thing that becomes apparent is that Joe is the missing piece that can’t be replaced.

He looks at me in shock, like I’m his greatest fantasy and worst nightmare all in one.

This was really cute and I loved how things played out in the end. Adam, you really needed that car to run you over to realize he was your other half all along. Took you long enough, man!

This is a very short book but it takes place in a very short period of time so it’s ok. A few days to realize their true feelings. Well, Joe was pretty much in love with Adam since he first met him and our Adam fell in love with Joe when he was a teenager but didn’t say anything to avoid ruining their friendship.

“I need you to be sure, Adam. I can’t…,” he trails off, voice cracking.
It breaks my heart to see him so vulnerable. I try not to dwell on how much time we’ve wasted being afraid. Instead I meet his gaze and will him to see everything I’ve held back.
“I’m sure. More sure of this than of anything else in my life.”

Adam had a hard time growing up and he is afraid of being left alone so I kind of understand why it took him so long to tell the truth. It took a temporary amnesia to be 100% sure that the only one he needed by his side was his best friend and roommate. He knew it but thought he was just confused. Confused between bromance and romance? It can happen, I’m not saying it can’t but so many years wasted because he didn’t want to deal with his strong feelings while Joe was there suffering from a broken heart.

I love those two and I’m happy there is a sequel because that ending left so many things unsaid and undone!