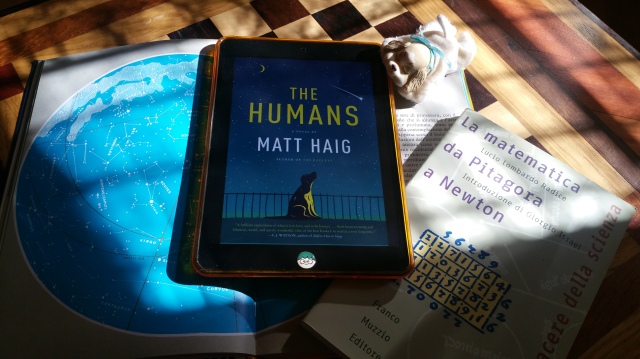 You don’t have to be anything. Don’t force it. Feel your way, and don’t stop feeling your way until something fits. Maybe nothing will. Maybe you are a road, not a destination. That is fine. Be a road. But make sure it’s one with something to look at out of the window.

Title: The Humans
Author: Matt Haig
Why you should read this book: Because it is deep and it makes you think, that is enough reason to read it and love it.

It’s hardest to belong when you’re closest to home . . .

When he is found walking naked along the motorway, Professor Martin seems different. Besides the lack of clothes, he now finds normal life pointless. His loving wife and teenage son seem repulsive to him. In fact, he hates everyone on the planet. Everyone, that is, except Newton. And he’s a dog.

Can a bit of Debussy and Emily Dickinson keep him from murder? Can the species which invented cheap white wine and peanut butter sandwiches be all that bad? And what is the warm feeling he gets when he looks into his wife’s eyes?

Read poetry. Especially poetry by Emily Dickinson. It might save you. Anne Sexton knows the mind, Walt Whitman knows grass, but Emily Dickinson knows everything.

This book was a surprise. I had it for a while because the cover was really cute but it lay there, undisturbed. Then I form a little book club with my sister and a friend and while looking for a book all three of us would like, we saw The Humans and decided to read it. I am happy we made that decision since it is one book I truly loved. I knew I was going to like it. It has aliens and it has mathematics. I love numbers; I love how math makes sense even if it drives you crazy because of its complexity. I would’ve loved to study it seriously. I loved it in high school because I understood its beauty and it was so easy for me to solve what the teacher asked me to solve. I was great and I miss that feeling.

The indestructible ninety-seven. My favourite prime.

If you know me you know that I love space. I don’t know anything about it but I love it. I love the stars, the constellations, the planets, black holes and comets, galaxies and meteors. I love it all. It fascinates me and it makes me dream. It also scares the hell out of me, not because of the infinity of it but because I know that the time will come when humans are going to explore it and I’m sure they will ruin it. Not always with bad intentions but they will inevitably ruin it.

They will want to explore, and as their mathematical understanding expands, then they will eventually be able to do so. They will find us, eventually, and when they do, they will not want to be friends, even if they think– as they always do– that their own ends are perfectly benevolent. They will find a reason to destroy or subjugate other life forms.

Andrew Martin was a professor and he proved the impossible to prove Riemann Hypothesis about prime numbers. Aliens know that if that hypothesis is proved the humans will make a huge progress in science and technology and start their expansion in the universe, in other galaxies. They can’t allow that to happen so they send an alien that takes Andrew Martin’s place after they killed him so that he can discover who knows about this discovery and eliminate the evidence. What alien Andrew doesn’t know is that humans are far more complex than he was previously told and he is not ready for all of that.

Hair, by the way, is very important here. Not as important as clothes obviously, but getting there.

First of all he is not ready to clothes and he is not ready to rain. I was surprised the hosts who sent him didn’t inform him about how to behave on Earth. He didn’t know a thing, not a word, not what to do with the professor’s family and friends. How was he supposed to know he had to wear clothes and pay for stuff? Nobody told him, poor alien Andrew! I thought, since they are such intelligent and technologic species, they knew how to harvest memories from another body so that alien Andrew could know about his past and present, but no, everything was new to him.

She put her arm around me. I did not know the etiquette. Was this the moment I was meant to recite poetry written by dead people or was I meant to massage her anatomy?

At first he is focused on his mission but the more he discovers what makes a human a human, he starts seeing the world differently and everything affects him in a way he didn’t expect. He starts understanding how the illogical things make somehow sense to humans and he starts feeling more human himself: he develops feelings of love, empathy and anger. He comes from a place where these feelings don’t exist and life follows only mathematical logic.

There are things wrong with your world, but an excess of love is not one.

What I truly love about this book was alien Andrew’s vision of the world. Since he is like a child (more like a genius child), he sees the world for the first time and looks at things with wonder and curiosity. He questions logic in things and sees the world with a different point of view and it is so true that it makes you think a lot. He is right about everything!! It gives me hope and I will use almost everything he wrote to Gulliver in my everyday life. Alien Andrew gave me hope in a better tomorrow, in different and better days to come if I face them with his advices. I know his worlds are going to accompany me forever.

Give Alien Andrew a chance and read this book!

Do I recommend it? Yes, do it right now, don’t waste the limited time humans have not reading it.
Rate: 5/5