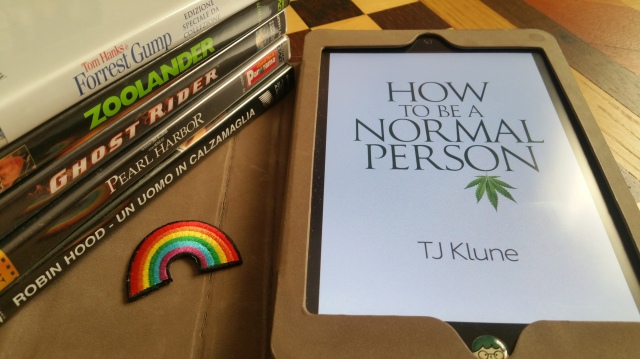 He looked ridiculous. And like the greatest thing Gus had ever seen.

Title: How To Be A Normal Person
Author: T.J. Klune
Why you should read this book: Because everyone needs to meet Gustavo!

Mr. Klune did it again. All the stars from me. My stomach is in pain because I laughed so much. Second book I’ve read and I can confirm I am in love with his writing style and I will recommend all his books to the (few) people I know and love. I won’t be recommending it to the people I hate, they don’t deserve these jewels. His books reviews will be always full of quotes because these quotes are gold!

“I smiled,” Gus insisted. “In the mirror this morning. It was awkward and I regret it ever happened.”

Meet Gus; full name Gustavo Tiberius. He is peculiar. He thinks of himself as abnormal. In my opinion he is nothing but a little bit peculiar and plenty interesting. I would love to be his friend and spend time with him, scowls and gnarls and everything. He hates with a passion Michael Bay and everything he does! Gus is the not-technological twin of Sheldon Cooper. They share many peculiarities but Gus is his own person and he is so special I want to instagram pictures of him only to see him getting annoyed and maybe blush a little bit. He doesn’t have the Internet, he owns a Nokia flip phone, he wears mostly black, runs a video rental store and frowns a lot. Lovely, isn’t he? I know I love him!

Meet Casey; full name Casey Richards. Casey is an asexual Californian stoner hipster (is that the correct order? Oh well) who so happened to moved in with his aunt Lottie in the same tiny town Gus lives. He thinks Gus is a wonderful human being. Casey is a writer of vampire/werewolves dystopian young adult books and loves to instagram everything. His hashtags are hilarious. He is a ray of sunshine that will break Gustavo’s routine and make everything better. Casey is everything Gus hates (read: a hipster from California) but he will be exactly what Gus needs to move on from his loneliness.

“I am not hyperventilating. I’m breathing heavily and regretting all my life’s choices.”

This is a story about two very different people who start out as friends, change for the best and they fall in love. There aren’t steamy parts because Casey isn’t interested in sex and that’s ok. He had a hard time figuring out who he was and now that that particular part of his life is clear, he is at peace. He loves hugging and is an amazing hugger. Aw, hugs are great! He loves to get high and smokes not only because of his glaucoma, or as he calls it, his stigmata, and when he is nervous but also because he enjoys it a lot.

Gus knows how special Casey is and doesn’t want to be abnormal because Casey deserves someone normal so, what to do? He gets the Internet and makes some weird researches. The websites he finds, oh my goodness. He finds tumblr, I can only imagine what he saw, and he will be scarred for life. The way Gus changes his appearance and the way he talks is hilarious because he takes everything he reads seriously and that results in some very awkward situations. And Gus in flip flops and hawaiian shirts. Thanks the heavens Casey finds Gus so charming everything he says make him smile, even the most absurd and random stuff. And there are a lot!

“I look like a gay Mormon missionary,” he lamented in the mirror. “Pardon me, have you heard the word of the Lord? It’s fabulous!” He scowled at his reflection.

I love that this book doesn’t have real sad parts or the usual part in movies in which the protagonists are apart from each other and they look sadly from their house’s window and mop. This is a happy book and it will make you smile. The main characters are charming, the side characters are hilarious and they complete the story and make it perfect.

“The second was Cape Fear with Gregory Peck and Robert Mitchum. The sexual chemistry between them was off the charts.”
“The sexual what now?” Gus choked out. “He was trying to kill him.”
“Exactly.”

So what exactly are the We Three Queens for each other? Friends? Sisters? Lesbians in a polyamorous relationship? What are they? I need to know but I am happy we never get that answer. But then again, I am so curious! I am going to demand a short story about them, some sort of spin off!

“What do you call it when Batman skips church?”
“I’m sure I have no idea.”
“Christian Bale.”

So many things that need to be said but I can’t tell you the whole book. I want to, trust me, but I can’t. I can tell you the telephone conversations between Gus and the girl from the Internet company are one of a kind and you will replay them in your head for comic relief whenever you’re feeling down, but maybe you won’t believe me. So, read the book. It has my approval and that, for your information, is one hell of a compliment!

People said he should smile more. He generally avoided those people.