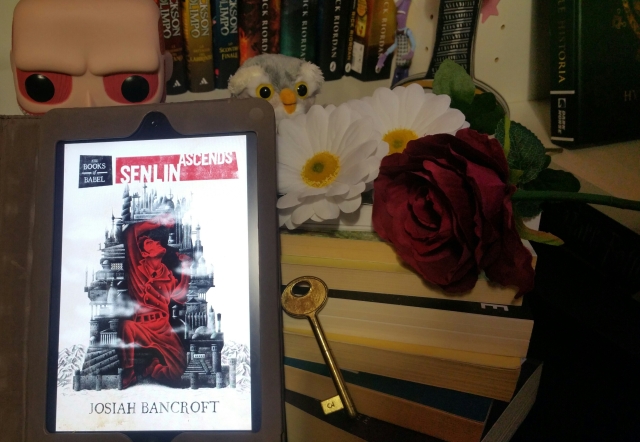 Title: Senlin Ascends
Author: Josiah Bancroft
Why you should read this book: Because it’s great and it has my seal of approval!
Do I recommend it? Yes, it is one of a kind and it won’t disappoint.
Rate: 5/5

I was attracted months ago to this book by its cover so I added it to me TBR books ever growing list; I thought it was very beautiful and the title intrigued me. It had something to do with the Tower of Babel and it had adventure in it. Count me in, I thought, I put in on my amazon wish list. Then I forgot about it. Until I bought my kindle and activated kindle unlimited and saw it was free to take! How fortunate, right? It made me rush to read it and it was one hell of a decision.

I loved everything about this book. It has a little bit of all the things I love about a good story: adventure, love, some sort of magic, steam punk feeling, a story outside of a specific time and really nice characters you love and love a little less from time to time.

“The Earth doesn’t shake the Tower; the Tower shakes the Earth.”

Tomas Senlin is a recently married headmaster of a little town. He is fascinated by the tower and picked it as their honeymoon destination. He read a guide written obviously by someone who hasn’t been to the tower because as soon as they both arrived they didn’t think they will be overwhelmed by the crowd and the vastness of it all, and they aren’t even inside the tower but only outside in the immense marketplace that changes continuously.
Tom is naïve about the whole tower situation because he still sees it as this miraculous construction and a thing of marvel, so he distanced himself from his wife Marya and, guess what? He loses her in the crowd.

“It’s odd you should mention my wife. I seem to have lost her.”

His mission is to find Marya and go back home with her. Simple, right? He just has to find her in a tower that nobody knows how many floors it has. Each floor is called a ringdom because, as the name suggests, it’s a huge kingdom, each with its own rules, dangers and peculiarities.

Tom will have to ascend the tower and he will meet a lot of people. He has to learn that the tower changes people and he has to be careful about the trust he puts on his new acquaintances. His adventures will challenge him as a man; from a quiet man of letters he will have to transform into a witty man of action.

First, it turned luxury into necessity, and then the Tower conspired to revoke all claims to happiness, dignity, and liberty.

The book has flying ships!!! Everything is so steam punk I loved it from the beginning. Vapor, weird machines, pirates, a mystery, secrets all over the place! There is one mystery I can’t wait to find out because I can’t think of a reason why that thing is a clue to finding out more about the tower. How many floors does it have? Who lives on the top? Does it have a top floor? Is there a king of the tower, someone watching over everyone else? Who the hell build the whole thing? I need answers and I hope I will get some of them by the end of the second book. Thinking that the author said there are going to be four books and that he writes slowly is making me nervous with curiosity.

“Top of the Tower,” she said with exaggerated dramatic emphasis.
“We will not. I’ll meet you right here beside this cart of socks.”
“Such a romantic!”

I will be on edge until I see Tomas and Marya together again and the rest of the characters happy forever. I’m delusional, I know, I am almost sure someone will die. I can only hope I’m wrong!

“The truth, when finally told, will often sound strange, while a lie is so often familiar.”

I don’t want to reveal anything more because the story is great and needs to be experienced first-hand. Trust me, you will love it. And yes, I have a crush on Tom Senlin, it was inevitable!