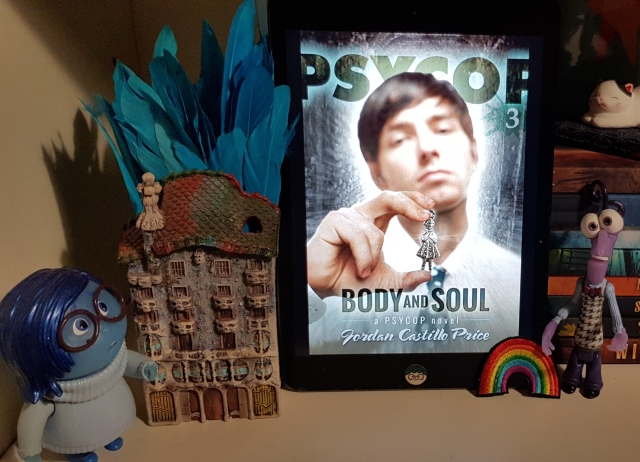 Vic and Jacob are looking for a new place to live; a place with possibly a nice view, a wide kitchen, no roaches and zero ghosts. No ghosts, that’s a must. It seems that people pretty much have died everywhere and this house hunt is becoming stressful for our Vic who has a lot of issues on his own.

“He coordinated very well with my apartment, when he was mostly naked. He made it look kind of classy”

Victor still thinks Jacob is going to get tired of him, of his abilities and peculiarities and throw him away. I don’t like seeing Victor so down and full of insecurities. After that short story, the awful one with Crash crossing the line and kissing Vic, I’ve been feeling anxious. I don’t want Vic making mistakes because he thinks he’s not worth the happiness he’s clearly experiencing. He doesn’t want Crash, never will, and he needs to set his mind into going full throttle into his relationship with Jacob.

The mystery in this book was not as interesting as in the last two but it has something the last books didn’t have. We see Victor interact with ghosts in a friendly way, more or less. We have only seen annoyed Victor and scared Victor but now the ghosts are truly useful to solve the crime they’ve been assigned to.

There are missing people and since the police don’t know whether they’re still alive or not, Victor’s squad is called to help. But Victor is half a squad right now, given that his last partner kidnapped him and is now behind bars. So, new partner for Vic and, after finishing this book, I have to say that he is a nice one and I hope he’s not going anywhere for now.

“My stomach clenched up and I fought back the urge to tell Zig that I was just kidding, and laugh, and give him a hearty, heterosexual clap on the back.”

Zigler, aka Zig, is the name of Vic’s other half at work and he is proving himself the right man for the job. He doesn’t make fun of Victor’s abilities, he trusts him, and he didn’t make remarks or faces when Vic told him about his sexual orientation. Are we going to see more of him in the sequel? Let’s hope so. I think Vic needs someone else to confide in.

I’m throwing myself into this series hoping not to have to deal with the dreaded love triangle or the miscommunication. I hope that both of them, being adults, will handle whatever problems they may face the right way. Let’s just hope there won’t be many of them. The more I see my Vic smile, the more I smile, the more the world will smile.

My anger didn’t last because the ending was so perfect, just what I was hoping for but didn’t dare of saying because what if I jinxed it? No way. I want my boys living happily ever after.