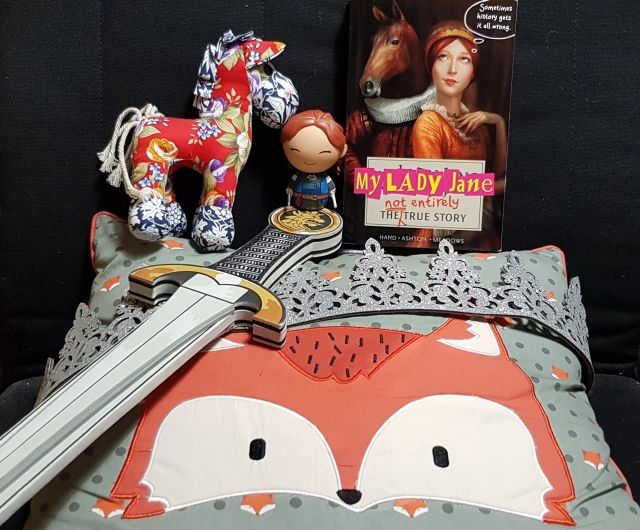 “Armies aren’t very good about carrying libraries with them. I can’t imagine why. We’d fight so much less if everyone would just sit down and read.”

I wanted something fun and fast to read and I couldn’t have chosen a better book that included all the elements I didn’t know I was looking for. Royals, a magical touch, history, and swords! Oh, I love swords! Give me a sword and you’ll make this lady warrior very happy!

I have to admit that I didn’t know all the events that happened in British history. What I know comes from TV shows and movies. Until I was 12 I lived in Ecuador so I studied a little bit of South American history, but afterwards I moved to Italy so I studied mainly Italian history and the parts involving the British royals were only a few pages. I did know about Bloody Mary and Mary Queen of Scots but no much else. It was fun getting to know more about King Edward VI and Lady Jane even with all the not very truthful facts.

He thought he finally understood the Meaning of Life now, the Great Secret, which he’d boiled down to this:
Life is short, and then you die.

Edward is sick, poisoned by evil people in the palace plotting to take the throne of England from him, and on his deathbed (but not really) he appointed Jane as his successor. Jane, all books and flaming red hair, is unmarried and that needs to change. He gets engaged to Gifford (call him G, please), son of his majesty’s loyal advisor. There’s just one little thing they didn’t tell Jane about his husband to be; he is an edian and he turns into a horse!

I loved the edian twist of the story. People who could turn into animals? Oh yeah! I wonder what kind of animal I’d be; I’m thinking a dragon or a beautiful swan but maybe I’d turned into a turtle or, better, a sloth. At least I don’t think I’d turned into an ass or a skunk like someone I read about.

“Wow, Father. Fertile and well-vetted? You make it sound so very romantic.”

Gifford and Jane started their married life in a very weird way but they get close through misadventures and love was in the air and stays in the air until the obvious happily ever after. Not spoilers here, it says from the very beginning that this story will give poor Jane (and her luckily still attached head) the happy ending she clearly deserved. Young love, the misunderstandings, the stares, the little touches; I’m a romantic at heart and I loved that nothing was too cheesy. The perfect amount of cheese was involved.

Edward, King of England, and spoiled virgin boy, is kind of a star in this book. You may think he is weak but instead he turns out to be everything you probably didn’t think about him at first. Long live King Edward! Edward’s chapters with his inner monologues about how he fancied Gracie were adorable. I think Edward deserves all the love he can get. All the love! Long live King Edward!

All the characters are great and funny but the real hero of the book is our dear Jane. Jane with her books, her synonyms, her determination to not be the woman of the situation, her courage, and her big heart. I love Jane, and no, her red hair was in no way weird.

The poor book. It didn’t deserve to be hurt just because Jane had to get married.

A fun book for history lovers and fantasy lovers; a book that has a little bit of everything and will make you smile. How can someone refuse a book that brings you joy? You can’t.