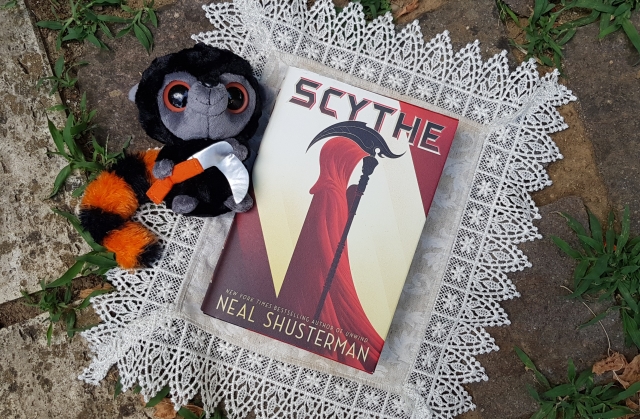 We are not the same being we once were.
So then, if we are no longer human, what are we?

This scared the hell out of me. Second book by Shusterman and second win for me, that’s for sure. He writes and takes you to an adventure, gets you hooked up into the story with amazing descriptions of a world, so vivid, you believe it exists yet you don’t want to live in it. It was scary because of its realness. This was such a compelling story and it had this depth in it that made me realize that no matter what will happen, our future won’t be nice. How is it that we are forever destined to ruin every good thing the world offers us?

People prophesized doom at the hands of a soulless machine. But apparently the machine had a purer soul than any human.

The Earth in this book has defeated diseases and death, and its society is run by the Thunderhead, an AI pure and just who helps everyone. Long story short, the world is great. But there’s only one problem: if people don’t die, there won’t be enough space for all of them to live, eat, to work. People in it “survives”: they take jobs that aren’t really necessary, go to school when they don’t really need it, have lots of children they don’t want to take care of. They are not truly living because when you are not afraid of mortality, poverty and hunger, then what really is your purpose?

Immortality has turned us all into cartoons.

That’s how the Scythedom was born. Scythes have the power to glean people, killing them definitely, taking them off a world where they are immortal and they can reset their age whenever they like. Scythes are human beings that are given a license to kill (and to grant 1 year immunity if they want to) without consequences, without laws forbidding it, with the world scared of them but at the same time charmed by them. Charmed by these people in colorful robes who can randomly select you to remove you from the world, adding your death to their annual quota of people that need to be killed in order to maintain balance in population.

Power comes infected with the only disease left to us: the virus called human nature.

Scythes’ actions are not ruled by the Thunderhead, who is always just and never makes mistakes, so they are flawed: they’re humans after all. There is corruption, favoritism, unnecessary cruelty, and people are unaware of all that. They just keep on living until one of those Scythes decides you can no longer keep doing that. Maybe the decision was truly random or maybe just maybe that scythe didn’t like you because you were too rich, too ugly or too fat. Are they punished for being biased and unjust? Not really.

To put oneself above all other laws is a fundamental recipe for disaster.

It was obvious that in a society with no more death or diseases and only one self governed institution that proclaims itself above all laws there’d be corruption. It makes me sick thinking how inevitable it was because, of course, they are humans and humans with power are dangerous. Give a group of people too much power over humanity and you’ll see how everything the Thunderhead worked so hard for crumbles, one little piece at a time.

This book is about two scythe apprentices, Citra and Rowan, and the different paths they take and are forced to take in the year of training before the last test that will proclaim them fit or unfit for the role. Following their mentor around, the lovely Honorable Scythe Faraday, will show them what lies behind the scenes of gleaning. Will they like what they see? Can they see themselves wearing the scythe robe and killing people? Will they ever lose their humanity and start enjoying it?

There’s so much to say about this book but none of the things I can say about it will make it justice. I wrote vaguely about what is the reality of the book and what is it about but, trust me, it is so much more than that. This book has lots of layers and without reading it you wouldn’t unravel it the right way, in the right order. I will end up spoiling the journey and this is a journey I took and recommend everyone to take.

My greatest wish for humanity is not for peace or comfort or joy. It is that we all still die a little inside every time we witness the death of another. For only the pain of empathy will keep us human.

Experience their journey first hand. Fall in love with characters, and hate other characters. Cheer for them. Have your heart broken and wish you had nanites inside of you like them that’ll make you heal and calm yourself in no time. Be mad at the injustice. Be frustrated at how ugly humans can really be when they think only about themselves and their wellbeing. Be moved. Learn. Be ready for all of this can seem improbable but maybe it is not after all.