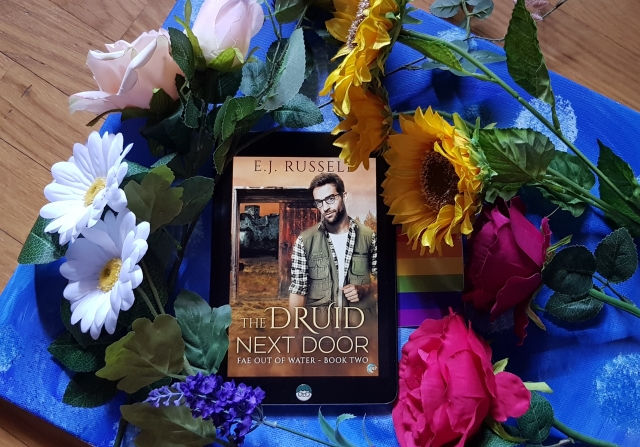 Never underestimate the power of kindness.

Title: The Druid Next Door
Author: E.J. Russell
Series: Fae Out of Water #2
Number of pages: 328 (kindle edition)
Good things about this book: I loved the welsh references even if I don’t think I could pronounce any of the words and I loved hearing in my head the way Mal spoke.
Bad things about this book: It has its flaws but nothing that spoils the book.
Do I recommend it? Yes, I do.
Rate: 4/5

You know how much I like stories about magic and mythical creatures so there was no way I wasn’t going to like this book. I enjoyed a lot the first one in this series and I was very glad to see the main characters appear and have a significant role in the events occurring here. David is adorable and I’m happy he is embracing his nature and his powers: he helps the boys a lot and when he talked about Alun there was so much love in every single word and it made me very happy.

“I only eat phallic food in front of Alun. Otherwise, it’s just a wasted opportunity.”

This book’s main character is Alun’s brother, Mal Kendrick, and an ovo-pescatarian environmental professor, Bryce MacLeod, who is Mal’s neighbor in the new super energy friendly house David bought him. Saving Alun’s life has cost Mal the use of his sword hand, the right, and has gained him the exile from Faerie, a curse he doesn’t know how to break and a severe case of brooding. Oh boy, does he brood. He broods with intensity, with passion. Lord Broody Kendrick.

Mal and Bryce meet in circumstances that make Mal thinks Bryce is an annoying but hot tree hugger, and makes Bryce think Mal is only a pretty face (read: the hottest face he’s ever seen with the body of a marble statue) with a terrible attitude. Little they know they will be forced to join forces to save the world. Yes, the world, I’m not exaggerating, the world is in danger.

Bryce is a druid but didn’t know he was one until Mal came into his life turning it upside down. He is powerful and needs a tutor and Cassie, David’s druid aunt, puts a leash on Mal and Bryce, a magical leash that doesn’t allow them to separate, to force Mal to teach the new druid everything there is to know about the supernatural world. There’s so much to know and Bryce is not once scared; he is interested and he thinks his newly found talents to be the greatest thing that’s ever happened to him. That and Mal, of course.

“If I’m all that bloody, maybe you should call me Macbeth.”

The attraction between the two of them is almost immediate. Mal is gorgeous and, even if Bryce doesn’t think much of himself, Mal thinks he is just beautiful even with his terrible fashion sense and his tactical vests and pants. If you are attractive to a sex god even in tactical clothes, you are not allowed to feel unworthy of his attention. Mal pretty much falls at Bryce’s feet, but that’s something you need to read about to fully understand.

You were almost feeling up a druid—reason has clearly abandoned ship already.

Mal is being offered a chance to break the curse by a giant cloaked figure and he accepts without asking details because he was drunk. Now he has to lie and ask Bryce to join forces to complete a series of tasks that will unveil secrets that will change the Faerie world and will put them in serious danger. In addition to all of that they are also trying to understand if the magical attraction for each other is real or just another one of the druid magic catches. After all, Mal feels the need to submit and that’s something that’s never happened in all the years he’s being alive. Things are going to get hot hot hot. HOT HOT HOT!

Mal and Bryce were great together, steamy, but sometimes they were very insufferable for two grown men; you can’t expect someone to act like you’d do and then if that doesn’t happen being mad. Still I found their story intriguing and entertaining. Now I can’t wait for the last book that comes out in less than a month and find out everything about Gareth.