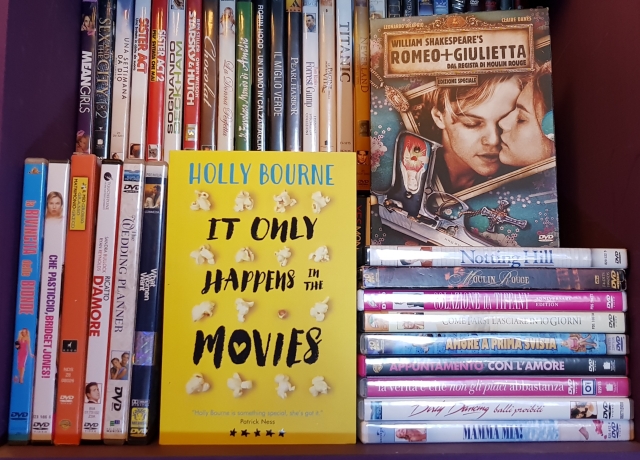 Is that how hearts work? Is love just a parasite that jumps bodies?

Title: It Only Happens in the Movies
Author: Holly Bourne
Number of pages: 384 (paperback edition)
Good things about this book: The paragraphs with all the romantic movies clichés at the beginning of the chapters!
Bad things about this book: I found the main character not very likeable but that’s my opinion. Nothing bad about the book per se.
Do I recommend it? Yes, it’s very enjoyable.
Rate: 3/5

I finished it yesterday but gave myself the whole night to think about it and this morning I’m confirming what I thought yesterday.
While I enjoyed it, minus some parts, I found myself laughing just a little and shaking my head a lot.
I kind of want to write a spoilery review because there’s one thing that bothered me so much I’m still mad about it. There were a few minor things that, in my opinion, were left just there while they needed to be explained. Give me all the facts and I will formulate my opinion, okay?

I read this fast because I wanted to see how it was going to end yet knowing how things were going to unfold but in the end it just didn’t get to me. I related to Audrey in some aspects but I didn’t connect with her. I don’t know how to explain it. I didn’t find myself cheering for her happy ending like I usually do in this kind of books. Why???

I didn’t like Audrey very much; I found her a little bit too whiny and I’m not talking about the obvious reasons she has to be whiny about but the boys’ reasons. It became more annoying the more I read. She had an embarrassing and traumatic experience with a stupid ex-boyfriend and now she does everything in her power to feel guilty on the inside and isolating herself on the outside. It’s not going well, she is stuck because she let her self-isolation going for too long and now she doesn’t know what to do to get her friends back and to stop being ashamed to be in the same room as her ex. Now she can’t stand romantic movies with all their perfection and happily ever afters.

I don’t think her problems are trivial and I cannot judge the way people might react to certain situations. We can’t act and react all the same way but her voice doesn’t resonate with my feelings. I don’t feel sad for her, I don’t root for her, I don’t care if she gets the boy or if she gets to make her dreams of acting come true. I found myself thinking she was often selfish and incoherent. You can’t be mad at people not doing what you think they are supposed to do. If something is not fair, say something! You can’t expect people to act how you want them to act, to behave the way you want them to behave. It doesn’t work that way. Yes, you have to tell someone if what they’re doing hurts you or annoys you, but you don’t get to reshape them completely to please you.

If you want a personalized boyfriend then maybe you were born in the wrong century. It’ll be easy to build yourself a perfect machine who does everything the right way. What’s the fun in that, though? I felt that Audrey was projecting all the things she wanted in a relationship in Harry and he, with his many flaws, was destined to fail in the boyfriend exam sooner or later. She’s been warned about him, she knew he liked to do many things she didn’t like; love is powerful but two very opposite people can only have a tiny fraction of happiness before everything goes kaboom. People reshape themselves a little when they’re in a relationship, each maintaining their peculiarities and personalities, but starting up with so many red flags sure isn’t the best way to built something that’s going to last or make you happy.

I guess I just didn’t like the way she faced the world. It’s a pity: I wanted to like her and to like this book with such a cute cover. There were positive aspects I liked about this book, for example I agreed with all the ridiculous clichés she wrote about romantic movies. Those bits were fun to read; I instantly thought of so many movies with those exact same scenes.

I have been avoiding the spoilery part of the review because I’m still conflicted: do I say it or not? That bit bothered me and it’s still bothering me to no end. It’s about Harry. I think the parts that really bothered me were about him and how those things weren’t explained or treated the way they deserved. I think I’ll carry this with me and it’s going to the unresolved stuff drawer in my brain. Oh well!

I will still read Holly Bourne’s books because I have always enjoyed them. Always! I trust her to come out with a new book that will give me smiles and happiness!