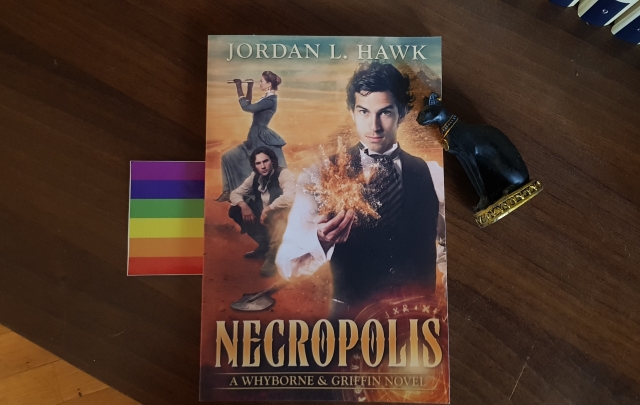 “I’d rather perish at your side than – than go home without you. You’re the world to me.”

Another day, another adventure for one of my many favourite book couples. I’ve had the 9 books already published for a long time but I’m trying to save them and read them slowly, afraid of having no more Whyborne & Griffin adventures when I need them the most. After a sci-fi book with mysteries from outer space, I knew I was ready for a sane dose of mysteries from ancient Egypt. It has always fascinated me and I have watched The Mummy and the sequel so many times I’ve lost count.

Christine sends a request for help to Whyborne; something is happening in Egypt in one of the excavation sites she’s working at. Grumpily, Whyborne sails for El Cairo, along with a much happier Griffin, to help Christine save her work and maybe also her life. Someone is rising from the dead and doesn’t want to spread love around the world. Our two beloved men will have to confront forces of evil, but also new love and a rather peculiar family reunion in the desolated and unforgiving lands of Pharaohs and sorcerers.

A disheveled and unshaved Whyborne was an image I didn’t think I needed in my life but now that I had it, I know I couldn’t have lived without reading about it. The clear pictures I have in my head of a smelly and dirty Whyborne are things of beauty. He, always so impeccable, now forced to be far from civilization for so long, but loving the mysteries of Christine’s new findings. I think he loved it, with all the sand in uncomfortable places and all. They still had time for steamy intimate moments, so I don’t think there was much to complain about the situation.

“I swear, you men have your entire egos tied to the functioning of a few inches of flesh.”
“More than a few,” Griffin said with a smirk.

Griffin was really careful in this book; after all that happened in the previous one, I think it’s understandable. He doesn’t like Whyborne experimenting with magic because he loves him so much he doesn’t want to lose him like he lost someone he cared about in the past. The nightmares are still very present in his mind and, in this adventure, he will have to summon all his courage and face his worst fears. Besides Whyborne being like a very stubborn baby with a new toy, and all the fights this could generate, this book is a chance for the two men to clear things up, things that are bringing Whyborne down for no reason other than his overthinking brain.

“I’ve always held humans are the stupidest of animals.” Christine cast us a rueful grin, “We’ve no notion when to turn and run screaming.”

Seeing Christine doing what she does best gave her so many more points in my book. She is graceful in her not standard feminine ways; I think her not wanting to conform with what society thinks a woman must or mustn’t do has shaped her making her someone who can do everything and more if you let her try. She will demonstrate she is valuable just as much as any man, and she can do things the same way, if not better, than her fellow male co-workers. I wish the world saw her as the force of nature she truly is. Go get them, Christine!

The fifth book of the series will have to wait because, as much as I love reading about Whyborne and Griffin, I realized I have so many unread books I want to read so much. Time just isn’t enough. Will I have to give up sleep? Nah, I don’t think my body is up to the task, it’s lazy.