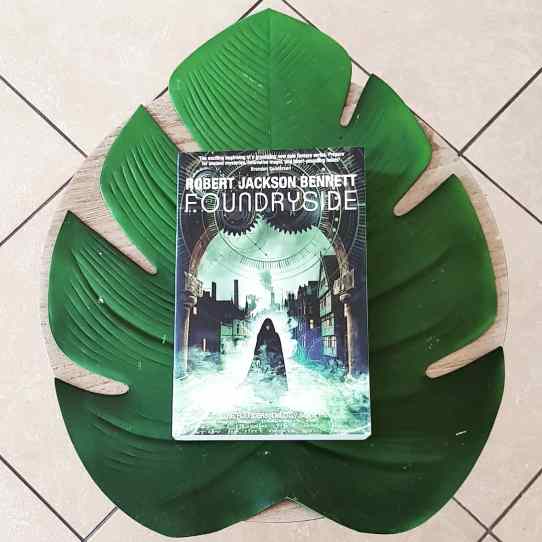 One day I’ll live a life that doesn’t force me to make such cold-blooded decisions, she thought. But today is not that day.

Some here will whisper of liberty – but you can’t be free if you aren’t alive.

I LOVED IT!!! I loved it more than I thought I was going to! It surprised me, in an incredible way. I went in thinking I was going to find another amazing adventure by Bennett and found exactly that but so much more! I’m amazed, I’ll talk about this book with everyone!

This book is certainly different from Bennett’s Divine Cities trilogy; it is less dark and pretty straightforward, but it doesn’t lack twists and revelations that took the story on a very enjoyable level.

I liked Sancia right away; a former slave who’s been tortured and modified so that now she hears the scrived devices and feels the objects she touches learning all their secrets. In this world, there are devices modified through antique symbols to defy their natural role in the world. For example, you have a sword, you modified it telling it the gravity it’s feeling is 10 times the one it actually is, so the sword, when used will hit harder and make so much more damage. The scrivers use all their knowledge to come up with more ways to tell objects they should be doings things that’ll defy physics laws. I found this very fascinating.

What I loved, like really loved, about this book, was how it gave the world a love is love state of being. There were many political problems with the merchant houses, the foundries, the crimes, etc, but at least who you liked wasn’t an issue and I thought it was refreshing as hell. When I saw a character blushing because they saw a naked shoulder of a same gender character, a SHOULDER, my eyes opened comically; I was so glad Bennett thought of giving his characters the freedom to choose whoever they wanted to love with the normality our real world should have done from the very beginning of time. Giovanni saying he wanted to go to an exotic island because he’ll be among so many gorgeous sailor, made me smile so much. There were so many funny moments in this book.

Of all the side characters there were, and I’m always afraid about many side characters because it means some are expendables at some point, Clef was definitely my favourite. Brilliant, emotional, deep, and so selfless. Berenice has many more sides of herself that she will show us, I’m sure of it. Orso managed to be okay-ish at first, but then I warmed to his grumpiness. He gave a kind of vibe that made me doubt everything he did, a vibe that told me he was going to do something I wouldn’t approve. Gregor, sweet Gregor, what can I say about him? Follower of rules, he wants a better place for people to live in. He has this utopic dream of the world being a big happy place with people helping one another. He likes to think he’s doing the things he does for the greater good and he does, maybe it doesn’t always end like he intended but he tries his best. I liked him a lot and can’t wait to see what he’s going to do now, after everything that happened in Tevanne. Oh boy, things happened, so many things.

I will now be waiting anxiously for the sequel, because I didn’t have enough of Tevanne and I need more of it and of its characters. I got to know them, and I’m now like a mama hen, and will be very protective of my babies. Don’t you dare hurt them, Bennett! I’ll be heartbroken. After the Divine Cities’ trilogy, I can’t help but being scared.