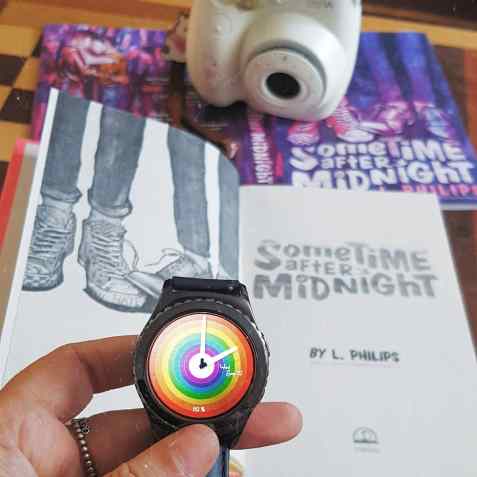 “I like romance.”
Victor merely shakes his head. “No, you don’t. You like structure, and stability, and a good dose of all those things practical.”

PLOT —
As much as it was introduced as a sort of Cinderella retelling, this had only the fact that they met, connected, and then one left leaving behind only the picture of his shoes. The rest was so far from being similar to Cinderella that I forgot about it. Nate and Cameron’s story about how they met, how Nate starts avoiding Cameron after learning who he is, and with Cameron having a dream and knowing that Nate is the key of it coming true, is well written and I thought it had a lot of great elements that didn’t drag the story and delivered what it promised.

CHARACTERS —
Nate was a little bit overdramatic and didn’t allow his reason to see what was right in front of him. I could forgive that because all the scenes where we had him and Cameron making music, were so sweet, deep and emotional that I forgot he was been unreasonable the scene before. Cameron from his part is an adorable young man; fresh out of high school, he is supposed to take over the family business, but he has dreams of his own and the fateful meeting with Nate will allow him to wish for more out of his life.

It’s like he planned this to torture me.
And damned if it won’t be the best kind of torture ever.

THOUGHTS —
While I was certain they were going to be okay in the end, the process of this love story, mixed with music and so many feelings, brought goosebumps to my skin. I learned about some bands and musicians I hadn’t heard before, so I put their songs as a background music and kept reading the book. The emotions I felt from that point on, reading the songs the boys were writing, it took me there with them, a little of a fifth wheel of a situation. This is the kind of book about music, in which music is just another character, as important as the main ones. Music raw, true, deep: the description of the music, the darkness of it, its sweetness, its power, brought tears to my eyes and my heart doubled in size.

CONCLUSION —
This book was the type of sweet that gets your eyes a little teary while being a tad sad but also incredibly romantic, all without being too corny. The right amount of sappy. I just loved it and was afraid for my heart, fearing drama incoming that luckily wasn’t as I expected.
I had a gigantic smile when I finished the book. And that’s how I love finishing books, plenty satisfied, full of joy

The photos or images I use in this blog are made by me or taken from the internet. I don't keep track of where I take them so if you see something yours, want credit or want me to take it off this blog, contact me and I will do it immediately.
Loading Comments...
Comment
×
<span>%d</span> bloggers like this: