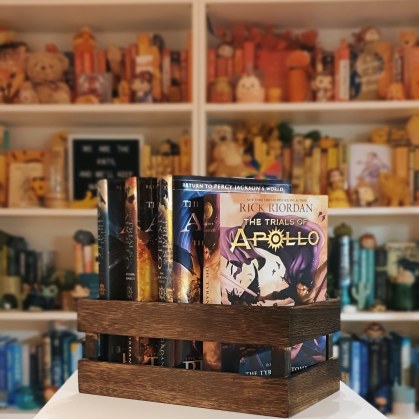 We’re reaching the end of the line. The last book will be released next year and all the puzzle pieces are coming together. There are tons of losses and it hurts. They might be characters you only know for a little while, or characters you have loved for longer, but these loses will impact you a lot. My heart hurts so much thinking what might happen in the last book!

In this book we’re still in Camp Jupiter and the awful thing that happened at the end of The Burning Maze? Painful as hell! I still don’t think it actually happened. I don’t want to believe so, for as long as I can, I will believe it didn’t.

Apollo is much more mature and human in this book. He feels deeply for these demigods, for Meg and for everyone else that had helped him out in this quest. He didn’t think it would happen. He starts seeing all the awful things that he’s done while he was a god and some were really bad. I’m not surprised so many people want him dead. But he’s getting better. That’s very important and will make the whole “last book” thing so much harder.

He fought two emperors and a dead king in this book, and he will fight Nero and the beast in the next, surely with the help of demigods from Camp Half Blood. But after that? Will he go back to Mount Olympus? Will he want to go back? I think he wants to be a god again but he will change so much of all the things he’s been doing (wrong). First of all, maybe he’ll stop having children. After being Lester it’d be weird just going places and getting people pregnant. I think it’d be super weird. I have this new image of Apollo in my mind and I can’t think about that at all. And what about Meg? Ahhhh, I need the last book! I need to know!