I hate this world. People are small. They’re ignorant, and they’re happy to stay that way. They make an effort to. They’ll spend time and energy finding ways not to learn things just to feel comfortable with their beliefs.

The first two books of this series were a present (free books, yeah!), but this one, the conclusion, was bought with my hard-earned money, so it needed to be a great ending, it needed to be worth it. It was, in a way; it could’ve been better, but I know that when we’re talking about human beings being stupid, I’m going to hate a little what I’m reading. It happens all the time.

So, I loved this a tiny bit less than the other two books. Maybe I wanted more. Maybe I was expecting something BIGGER to happen, a twist of sorts. It didn’t. At the end of Waking Gods, our “heroes” got themselves teleported to the alien planet of the creatures who built Themis and all the other giants that invaded the Earth and killed hundreds of millions. At the beginning of Only Human, we learn that they’ve been living there for nine years. We had some files about their lives on the planet but not as many as I expected. Eva didn’t have many files from her time over there: we learned a little bit about her from Vincent. I know that’s because she didn’t want people to know about what she was doing, but I was sad not knowing more about her friendship with Ekim, and how she learned to speak the language so fast. I wish there was more. A little more of everything.

“People are denying even the most basic scientific facts because it makes them feel better about hurting each other. Do you realize how horrifying that is? We’re talking about human beings making a conscious effort, going out of their way, to be ignorant. Willfully stupid. They’re proud of it. They take pride in idiocy. There’s not even an attempt to rationalize things anymore.”

I get it, being scared makes you do stupid things, but what happened on Earth after the robots went away was beyond ridiculous. Why did people let that happen? Why did they think it was the most reasonable solution, hate each other more, kill each other, instead of re-build what was broken together, as a big community? It doesn’t make any sense, not to me. They let themselves be controlled by their fear and the result? Complete and absolute chaos! I couldn’t believe how the world changed after the invasion. I was appalled by the ignorance of the human race and how people just stood by and let those horrible things happen! But then I realized how REAL it was, how likely it was to happen here now, how it is happening now. And I just couldn’t keep my head from shaking in disbelief at how we really deserve a do-over, an alien invasion to put us in our place, to teach us a lesson in humanity, because at every chance we get, we make the same mistakes all over again. The hope for a better future is always there but somedays it’s just so hard to see it.

Still, I loved the “files” narration. I loved the characters and I loved to hate them when they were being unreasonable. And they were, a lot!!! Great trilogy by a great author that I will keep on my radar.

I wanted to save everyone. I wanted it so bad. Maybe it’s because no matter how much I try, I can’t shake the thought that they’re dying because of me. I fell on a hand and I brought the world to the brink of war.

What a rollercoaster of a book. I was left shaken and with my jaw on the floor. So many things happened. So many twists I should have taken into consideration but instead didn’t so I was genuinely surprised. And shocked.

The first book ended with Rose literally coming back from the dead without her memories of working with Themis and her team of soldiers and scientists. This book starts nine years after that, with Rose feeling out of place and like a fake, and with Kara and Vincent still being the Themis pilots going on tours around the world. A new organization for the protection of Earth has been founded and it has the giant robot as sole protector of the planet. But the feared alien invasion, even if later than anticipated, decided to arrive and one after the other, bigger giant robots than Themis start appearing on Earth in highly populated cities. People in power don’t know what they want, they are scared, and scared people make mistakes. Things weren’t looking very good for humanity.

I still love the writing style of this book: the dialogues, the journal entries, and the mysterious man behind it all. It felt like a movie was playing inside my head while I was reading. No long descriptions, just the characters interacting among themselves or involved in some mission that could be fatal. Sometimes this kind of narration is refreshing.

The third and last book of this trilogy, Only Human, is on its way and I will receive it soon. I have already put it on my may tbr list so I will read it as soon as it gets here. I’m really curious about what is going to happen after than ending! I didn’t really see any of that coming. These books would make a really great mockumentary movie. 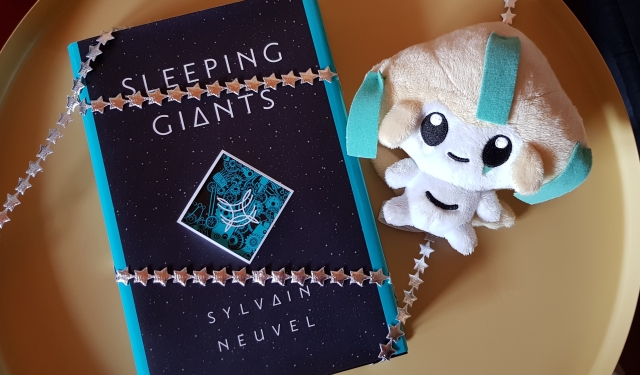 “Generally speaking, people tend not to question what they’ve been told was true. Scientists are no different; they’ve just been told a lot more things.”

Title: Sleeping Giants
Author: Sylvain Neuvel
Series: Themis Files #1
Number of pages: 304 (hardcover edition)
Good things about this book: The files, the interviews, make you part of the story from the very first page.
Bad things about this book: Can I say the cliffhanger? Maybe not, seeing as the second book is already published.
Do I recommend it? Yes, if you love sci-fi books, there’s no way you’re not going to love this one.
Rate: 5/5

I realized I almost always choose a book or by its cover or by its title. After I make that first choice, let’s say 8 out of 10 times, I’m lucky enough to find that the summary is a perfect mix of everything I enjoy in a book. After that nothing could stop me from buying it right away. That’s what happened with Sleeping Giants, with a tiny little difference: I received the first two books of the series as birthday presents back in November. Free books are the best!

Rose Franklin fell into a hole when she was ten, discovering a glowing giant hand, and her life didn’t change. It did chance almost two decades later when she found herself studying the hand again. She found a way to retrieve all the other pieces of this incredible giant all around the world, realizing it’s impossible humans made it. This discovery will change everything and everyone involved in the project. Why did they find the hand in the first place? Were the pieces put there for them to find when they were ready? What will happen now that they have the complete thing assembled? Is it a weapon?

“This, all that’s happening now, this is your bat mitzvah. You can play with atoms, you can sit with the grown-ups.”
“What does that mean for us?”
“That means you won’t be forgiven for childhood mistakes anymore.”

Told in the form of interviews and journal entries, this book takes you, with a lot of fast forwards, to the events involving the pieces of the statue, the assembling, the understanding of its commands, and the studying of its components. I found that the writing style made it easier to visualize what was going on. Usually the interviews told events already over, but lots were of conversations of planning ahead and insights of the project. Everything could be easily played inside your head like a movie, or maybe some sort of documentary. I got even more involved because it was like I was in the room with them, going through all the facts.

The characters were likeable and hateable; you form your opinions almost right away but that won’t mean you won’t have quite a few surprises along the way. Characters will have your cheer; others will have all the bad karma you can send their way. There are tons of twists, tons I’m telling you. I don’t think I have ever been so unprepared for things to happen. Are you kidding me? How was I supposed to be prepared for that epilogue? Nothing could have prepared me for that and, for it, I’m grateful. I love surprises!

I have now read the summary of Waking Gods and, what can I say, I need to read it as soon as possible. What the hell is going to happen?

The photos or images I use in this blog are made by me or taken from the internet. I don't keep track of where I take them so if you see something yours, want credit or want me to take it off this blog, contact me and I will do it immediately.